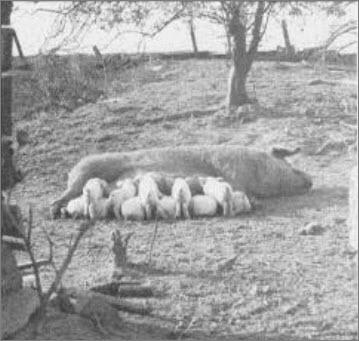 This is a modern version of the parable about the workman who, on being given the talents, multiplied them. Only the workman is a widow, Myrta Clutts of Cobden, Illinois, and the talents are not pieces of precious metal, they are pigs.

But we are way ahead of our story. When Wayman Presley, along with his friend Rev. William Lirely, envisioned the great Cross of Bald Knob, he decided to raise the purchase price for the site from people of the common walks of life. Myrta, hearing of his efforts, volunteered a “Faith” pledge of $100. Her children objected, “Where will we get the $100?” Myrta replied, “I have the faith.”

Now one of Myrta’s talents was an old sow. One day the sow had piglets. Myrta looked at the soft, squirming mass of squealing new born pigs. It seemed there was an awful lot of them so she counted them and there were 21. There must be some mistake. This was more than three times the average litter. She counted them again and there still were 21. Never before had the sow given such a litter. “An answer to my faith”, Myrta told her children.

Already they were pushing and shoving for a nipple. They were born hungry. Twelve nipples were all the sow had. That meant that some of them would stay hungry. Myrta knew enough about pigs to know that the smallest ones are shoved out and stunted. Even when there are just a couple of extra pigs, but 9 extra, they would just starve if she did not figure out something to do.

The old sow became restless. She did not want to be bothered so Myrta went to the house. Of course she could rig up bottles and nipples, but fill nine bottles, four or five times a day. She would get nothing else done. Then she thought of Flossie, her dog that had just lost her puppies. Maybe she would take care of them.

When Myrta went to get the extra pigs, the sow had already rolled over and killed three of them. This left six extra pigs. So she caught 6 pigs in spite of the snorts and warning protests from Old Betsy the sow. Poor little things, they were so hungry. They nudged her hands and arms blindly seeking a nipple.

Flossie sniffed at the queer shaped animals Myrta put down beside her. They had a foreign smell, not at all like her puppies. The piglets set to work shoving and sucking and their little soft sides filled out. Soon the pigs slept where they had fed all curled up against Flossie. She snuggled protectively around them. Flossie raised them all.

The sow also raised her twelve pigs. Myrta sold fourteen of the hogs, paid her $100 pledge, and had more than $400 left. The remaining four pigs were kept for brood sows.

Myrta, remembering her successful “Faith” pledge, pondered, “Isn’t there some way these talents can be multiplied for the Cross?” Wayman Presley believed they could.

“The pigs will do it.” he told Myrta. “You let me have the four pigs from Old Betsy and the farmers will raise them to help build the Cross. We will make a beautiful dedication room in the Cross and exhibit metal plaques showing the names and addresses of all who raised pigs.” This will allow The Cross to have even more meaning down through the years. Descendants of those who raised the pigs will be reminded that great, great grandfather and grandmother helped to build it. They raised a pig.

Using the four remaining brood sows from the big litter as a beginning, Presley was soon in business. Hogs multiply rapidly. They could have two litters per year. Working often far into the night, after completing his rural mail route, he built a large barn on the little hillside farm of the Widow Clutts.

Farmers along his 67 mile mail route allowed him to glean corn from their fields for feed. Southern Illinois University in Carbondale let him have their garbage. Soon pigs were all over the place and Presley was in business.

Using a homemade trailer tied behind his model A mail car, he distributed small pigs to farmers in 11 counties in the southern half of Illinois. More than 1,600 pigs in all. When they reached market size the farmers sent the sale-price to the Bald Knob Christian Foundation’s Bank in Carbondale.

The pigs were raised alike on Protestant and Catholic farms. A newsboy in Centralia, Illinois, Mike West, built a pen in his back yard and bought feed from money earned on his paper route. He watched the little piggy grow into a great porker. It sold for nearly $100 which he donated to the Cross. There were many other similar instance. 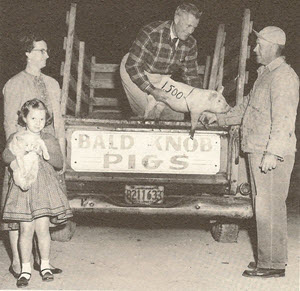 The project netted some $30,000 in a little over three years. All this was done in Wayman’s spare time after 6 days per week on the mail route. He had used up all his vacation and without pay leave time and had to temporarily abandon the pig project, but Presley, Widow Clutts and Old Betsy the sow have shown what can be done if you will only try. They have also demonstrated which kind of prayers have the best chance of being answered.

Donations can be mailed to: