Among the foothills of the Ozark Mountain range that stretch into Union County and southern Illinois, rises a beacon, a monument of peace, faith, charity, and of hope.

Towering above the landscape at a over 111 feet, and visible for over 7,500 square miles, this is the Bald Knob Cross of Peace – one of the largest crosses in the United States.

Bald Knob Cross is situated in the Shawnee National Forest near the small town of Alto Pass, Illinois. BK Mountain itself towers 1000 feet above sea level.

But how did a mountaintop in rural southern Illinois become first the site of an annual sunrise service, and later the location of an 111 foot cross? The story begins in the spring of 1936…

In 1937, Wayman Presley, a native of Jackson County in Southern Illinois was walking and conversing with Reverend W. H. Lirely. The two spoke about the need for a place where people of all denominations could gather for worship. As they pondered the possibilities, their attention was drawn to nearby Bald Knob in rural Union County. Bald Knob stands prominently at over 1,000 fee above sea level in the beautiful Illinois Ozark Mountains of Southern Illinois. What came out of that initial conversation was the first Easter Sunrise service in 1937. There was a small, but enthusiastic crowd of 250 in attendance. Attendance grew the following years into the thousands. The popularity of the Christian community gathering led to a plan being put in place to purchase the Bald Knob hill.

From 1948 to 1951 Presley secured 116 individuals who would be willing to commit $100 each to purchase the land (that commitment approximates $890 in today’s money). The 116 individuals were the first members of a newly formed not-for-profit organization which purchased the land. They were from 34 communities in 5 states.

By 1953, funds had been raised locally to construct the foundation of the western hemisphere’s largest Cross. The Cross began receiving national support when the General Federation of Women’s Clubs took on challenge to raise funds and received another boost when Wayman Presley was featured on the wildly popular nationally syndicated program, This Is Your Life. Even though contributions to the effort increased, it was still not enough. Wayman took leave of absence from his postal service position to throw himself completely into fundraising. A strategy was devised to challenge people to raise pigs, sell them, and turn the profits over to the Cross. A staggering $30,000 was raised through the campaign.

The formal groundbreaking ceremony was held in conjunction with the 1959 Easter Sunrise Service. The framework of the Cross stood for several years until enough money was raised to cover the superstructure. The Cross was completed in 1963 when the last of over 900 heavy gauge steel panels with a bright white porcelain veneer was affixed to the framework creating a spectacular night sight which could be seen for 7500 square miles after it was illuminated with 40,000 watts of lighting. The Cross quickly became the most popular tourist attraction in Southern Illinois, one of the largest crosses in the United States, attracting visitors from literally all over the world. 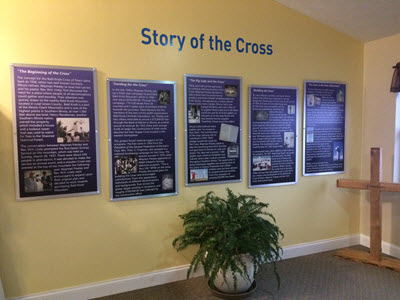 The new history section in the Visitor’s Center.

However, in the years following, the Cross began deteriorating physically as interest in the organization itself waned. In the early 2000s disputes began arising between board members which ultimately resulted in legal litigation. In 2006, the Court ordered the properties be locked down until the proceedings were concluded. Without any maintenance, the Cross fell even further into disrepair as the dispute was deadlocked in the courts.

In the summer of 2008 a settlement that was supported by both sides of the conflict began taking shape. In the agreement, all current board members would step down and the court would appoint a temporary transitional board comprised of mostly religious leaders in Southern Illinois. The final legal settlement became official on Christmas Eve 2008. The seven member transitional board met in the middle of January 2009 for the first time. The balance of the 2009 year was spent aggressively attending to the needs of restoring the monument itself. Approximately $150,000 was spent in demolition of the original panels and the repair of the superstructure itself which was completed in the fall.

On February 9th, 2010, the transitional board conducted a full-disclosure press meeting at the Annual meeting of the organization. New by-laws were passed unanimously with significant representation and support from both sides of the litigation that divided the previous board. An aggressive membership drive was immediately launched after the meeting to begin rebuilding the unity and support for Bald Knob Cross.

** Watch the video below about the lighting ceremony that took place on December 22, 2012 **